In September, the winner of the Carbuncle Cup was awarded to the “Walkie Talkie” Tower at 20 Fenchurch Street, London. The Carbuncle Cup is a slightly tongue in cheek annual award given by Building Design magazine to the ugliest building in the UK completed in the last 12 months. Like most of the previous winners, the Walkie Talkie Tower has drawn both criticism and praise for its design, but winning the Carbuncle Cup is not necessarily the bad news it might appear to be. 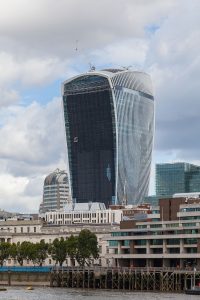 Of course no one sets out to design an ugly building; beauty is very much in the eye of the beholder. The Stockport Pyramid, a building close to our UK office, was once described by Prince Charles as a “monstrous carbuncle”. Built in 1992 (before the Carbuncle Cup was invented) it is now a comfortable and incongruous part of the Stockport landscape and serves as a useful landmark for people visiting the area.

The Walkie Talkie Tower is a distinctive looking 34 storey building in London’s financial district. Completed in 2014 is has an unusual top heavy design, meant to maximise space at the top of the building where rents are said to be higher than the lower floors. The building has double and triple-glazed panalised aluminium cladding on its exterior and the top three floors are home to a “sky garden” which is accessed by two lifts, and includes a large viewing area, terrace, bar and two restaurants. The main office floors of the building are served by fourteen double-deck lifts and offer fantastic views across London.

The Walkie Talkie Tower has caused several problems locally, with solar glare issues being reported during its construction, including a Jaguar parked nearby has its bumper melted by the solar glare that caused nearly £1000 damage, and residents and businesses have also reported singed carpets and smouldering doormats. An awning has been installed to prevent this in future. A not uncommon problem with the building of skyscrapers is a wind-tunnel effect, despite modelling the potential issues during the planning stage, the wind problems were much worse than anticipated.

The building has drawn criticism from across the building industry and the chairman of the jury that awarded the Carbuncle Cup, Thomas Lane, said “it is a challenge finding anyone who has something positive to say about this building”.

It’s not all bad news, though. As Oscar Wilde once said, “the only thing worse than being talked about is not being talked about”. Winning the Carbuncle Cup might not have been the publicity boost the team behind the building wanted, but it has made 20 Fenchurch Street one of the most talked about buildings of the year, and love it or loathe it, it’s not going anywhere anytime soon. And who knows, in 20 years’ time it might be as part of the landscape as our very own Stockport Pyramid.

For more information about CAD Design Services, BIM Compliance and complete CAD solutions in the UK and UAE, visit The CAD Room website at https://www.thecadroom.com/ or phone 0161 427 0348.