Summary of the main findings from The National BIM Report 2018

For the last eight years, the NBS (National Building Specification) has undertaken a national BIM survey to discover valuable insights into BIM adoption, people’s general attitudes towards BIM as well as whether the UK Government’s BIM Mandate is working or not. This year was no exception, and as a company who work with many building services firms, we were interested to see exactly what the findings were. The NBS surveyed 808 people and here is a quick summary of some of the key points:

One interesting finding that came to light as part of this report is the fact that while “two thirds (63%) agree that the Government requires BIM on its projects, a very similar number (62%) feel that the Government is not enforcing this.” The feeling that came through from some of the comments made on the survey was that many clients, including the Government themselves, did not have a good understanding of the benefits of BIM. This area is not explored further though, with the final comments being, “The BIM mandate, then, has not been perfectly implemented, but the Government’s drive for BIM is right.”

The next section of the report focuses on the use and adoption of BIM and shows some very encouraging results. For example, there is a 12% increase in the number of respondents using BIM from last year – which is the highest year-on-year growth since 2014. 25% of respondents, however, claimed that they were only just aware of BIM, with a paltry 1% saying they were unaware.

One result the report throws up that some may find surprising, is the fact that BIM has actually been adopted for projects within organisations of all sizes. 80% of medium practices, 78% of large practices, and 66% of small practices have adopted BIM, according to the survey – which shows that BIM has benefits for businesses of all sizes.

For only the second year on the run, the NBS asked respondents about the frequency of BIM use, and they found that nearly 1 in five (18%) use BIM on every project they work on. The number of businesses who adopt BIM but then only use it on a minority of projects has dropped from 33% last year to 27% this year, which led them to the conclusion that “once BIM is adopted, it is used for most projects.” The NBS also believe that their survey shows that over 90% BIM adoption is achievable within the next 3 to 5 years.

If you think of BIM as a way of working rather than just a piece of software, then making sure everyone in your business has the knowledge and skills needed requires investment in training. This year’s survey showed that there was a small increase in people’s confidence in their knowledge and skills in BIM – rising to 58% this year from 55% last year, and 45% in 2015. This is not a rapid increase by any means, but the NBS believes that “the skills and knowledge needed for the UK to make a success of BIM are coming into place.” 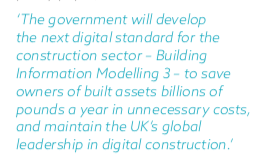 If you know anything about BIM, you will have realised that it is not one entity but a gradual progression towards greater sharing of standardised project information in a collaborative way. There are actually 4 levels of BIM altogether, with the Government’s mandate only requiring that projects achieve Level 2 at the moment. Encouragingly, 88% of survey respondents said they were aware of the different levels of BIM with only 12% saying they weren’t. When asked what the highest level of BIM their organisation had reached on a project the majority of respondents (70%) said Level 2, with 8% saying Level 3! As BIM level 3 has not been fully defined yet, this may be a reflection of the sophistication of the project rather than a belief that they have achieved a specific set of criteria.

Further analysis of the data shows that perhaps people are mistaking the fact that they are working more collaboratively in a 3D environment to mean that they have achieved Level 2 BIM. After all, only 29% pass the BIM model on to those who are responsible for the continued management of the building

Use of BIM Standards

Standards are vital when it comes to BIM adoption, as they are essential for describing the way in which collaborative BIM practice should be done, with the report stating that, “Standards provide a shared understanding of what needs to happen, and how.” It is interesting to see then, that 70% of respondents to the survey felt that ‘BIM is not sufficiently standardised yet.’ However, on a more positive note, the number of people using PAS 1192-2: 2013 and PAS 1192-3: 2014 has grown slightly since last year.

Encouragingly, 82% of survey respondents agreed that ‘BIM is the future of project information.’ However, this is where the good news ends! Only 35% of respondents felt that they trusted what they hear about BIM, with only 27% agreeing that ‘the UK is the world leader in BIM.’ On a more positive note though, 67% went on to agree that ‘using BIM results in operation and maintenance savings.’

One interesting thing that the NBS survey does is to compare the views of those that have already adopted BIM with those who haven’t so that they can ‘compare anticipation with experience.’ 94% of BIM users said that adopting BIM had required changes in their workflows, practices or procedures, but only 5% said they would rather not have adopted it.

The barriers to adoption are pretty impressive as well, with 71% saying it was due to ‘lack of in-house expertise,’ 69% saying there was ‘no client demand,’ and 61% saying it was down to a ‘lack of training.’ However, the NBS felt that ‘the responses we have seen from those who have adopted BIM is that it is a worthwhile investment of time and money.’

If you would like to find out more about our BIM or CAD Services UK, then please give us a call on 0161 427 0358 or send an email to office@thecadroom.com.