BIM in the UAE

As one of the leading BIM companies in Dubai, we are not immune to the splendour that is this city’s skyline. Regardless of the architectural style you prefer – be it classic or ultra-modern – there really is something for everyone’s taste. So, here is our guide to just a few of Dubai’s most striking buildings:

No round-up of buildings in Dubai would be complete without a mention of the Burj Khalifa which holds the title of being the tallest building in the world – at the moment! Construction on the Burj Khalifa was actually completed in 2009, and it took over five years to build. It was designed by Adrian Smith at Skidmore, Owings & Merrill (SOM) and many people have likened the design to that of a rocket ship that looks like it might take off at any moment. Rumour has it that if you laid all the steel used in its construction from end to end it would reach from Dubai to Melbourne! At 829.8 metres it is not only the tallest building in the world, but it is also the tallest free-standing structure in the world, has the highest number of stores in the world, the highest outdoor observation deck in the world, and contains an elevator with the longest travel distance in the world. Wow! It is no surprise then that the Burj Khalifa attracts around 4,000 visitors a day to its viewing floor! 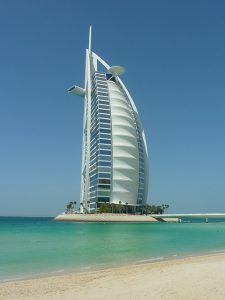 Another stand-out building in the Dubai skyline is the Burj Al Arab, which is actually the fourth tallest hotel in the world! No wonder Dubai’s skyline is so stunning. Designed by Tom Wright at WKK Architects, this 5-star hotel was completed in 1999 and is built on an artificial island. Easily identifiable by its sail-like structure, this is one of the most luxurious hotels in the world, with exceptional butler service and an amazing seafood restaurant which you enter via a simulated submarine dive! One of the outstanding features of this hotel is the helipad at the top, which has been used for a number of other events including a tennis game between Andre Agassi and Roger Federer!

We couldn’t end this round-up without talking about one (or two) of the oldest buildings in Dubai, the Emirates Towers. Designed by Hazel Wong and completed over 16 years ago, these two towers are an iconic part of the Dubai skyline. They are the 23rd and 47th tallest buildings in the world consecutively, with the hotel tower standing at 355 metres and the office tower at 308 metres and they are connected by a boulevard which contains many retail outlets. The rooms in the hotel have recently been refurbished and guests can take advantage of unlimited access to Zero Gravity private beach and Wild Wadi Waterpark!